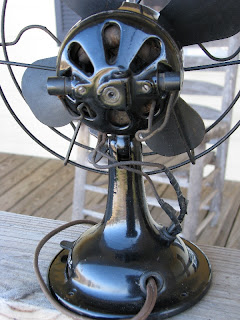 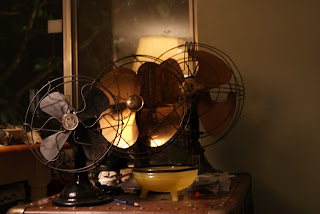 This little fan has been found in R&M catalogs starting around 1920, depicting this model with no oil cups and a large script badge with no flag in it, later models appear to have oil cups and a badge with the flag on it and smaller R&M script inside of that flag. These are very nice running little fans with a neat and open all cast Iron construction, though the 8 inch two piece stamped steel blade is lacking a bit in construction quality. I got this from a fellow collector for $50 shipped.
Posted by Lewis Holland at 11:02 AM 2 comments: 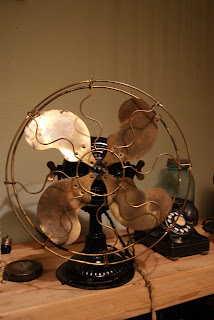 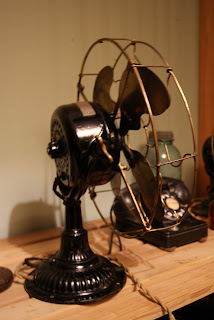 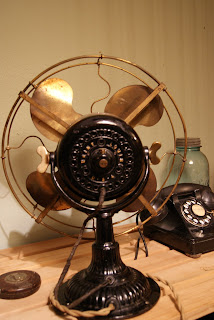 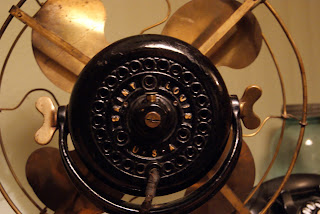 I purchased this fan about a month ago from a fellow fan collector in Vancouver WA. The Emerson 1010 was made between 1902-1904 and was their second trunnion mount fan. It utilized the earlier style ribbed base before the bottom lip became ribbed, and has a sort of candlestick stem going up to the trunnion before Emerson used a wall mount adaptable ball in the base. The motor uses a centrifugal start switch and the fan has two speeds. This was the last series of fans along with the 910 stick mount to utilize a nickle plated brass motor tag. I paid $400 for it and if I had to rate it this would be the nicest original fan I own. It starts up and runs great on two speeds, with a distinct difference. It retains almost all of the original paint which is in quite nice shape. The cage and blade retain almost all of their original lacquer which is in great shape. It even has what's left of the original rubber feet and it retains it's wiring grommets. Even the head wire is original, although not in the best shape but still functional. And unlike most of these retains almost all of the gold lettering on the motor and the nickle plating on the tag.
Posted by Lewis Holland at 5:23 PM No comments: 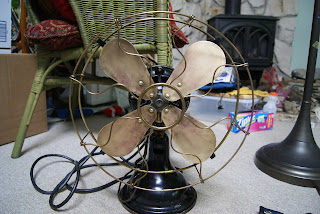 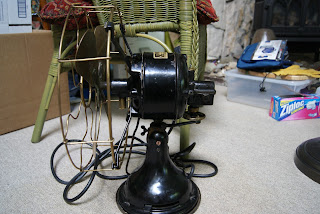 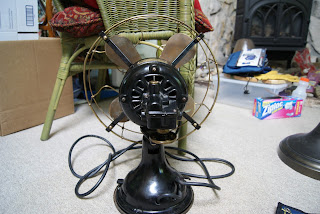 This fan earns it's name quite well: The tank. It weighs in at near 35 lbs, that's a lot of weight for a 12 inch fan. R&M had previously been re branding Westinghouse tank fans for their line of AC fans. When Westinghouse switched from cast iron to stamped steel, R&M came out with their own line of tanks in 1911. Consequently in 1912 R&M re-collaborated with Westinghouse to develop the gearback oscillator, one of the first "standard" style gearbox oscillators with the oscillation wheel on the bottom. the first model, list 151174 had a start switch motor and a slightly different oscillation adjustment on top of the gearbox, along with utilizing a lollipop style cage. in 1913 R&M started using their own motors in the gearbacks, yet still utilizing the Westinghouse tank style motor castings. These were continued until 1915 when R&M switched to stamped steel. I bought mine (which is a 1914 model) at the fanfair auction with a broken front casting, and a later Clockwise blade, having had two of the motor leads swapped to run in the opposite direction. I got the casting from a fellow member as well as the blade, swapped the motor leads and it ran fine. The bearings however are somewhat worn and I'll get some re-machined at some point. It's also missing the flag badge in the middle of the cage, reproductions are made and I'll get one at some point.
Posted by Lewis Holland at 2:38 PM No comments:

The Century Skeletal: A masterpiece of industrial machinery. 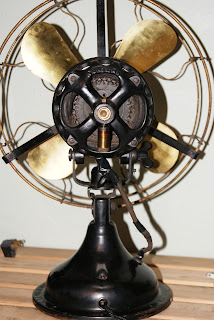 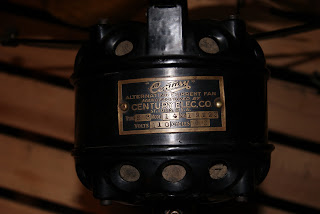 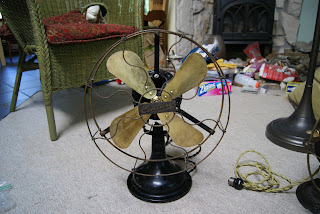 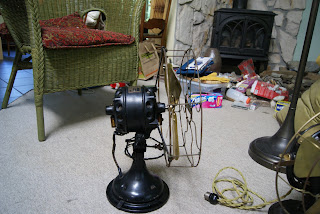 Century skeletals are very unique and interesting fans. They were Century electric's first line of desk fans, starting with the rare and hard to find frame S4, a fan that I would love to have some day. The S4 is believed to have been made between 1908-1910. They have massive split phase motors and have got to be one of the most powerful desk fans ever made. The Frame S3 came after the S4 and is much more common. The date code in the base of my S3 dates it to 1914, although some S3s have been found with dates as late as the early 1920's. The earliest S3s retained the cast iron base that the S4s had with a split phase motor, and shortly after that they transitioned to the stamped base 3 wire headwire S3s in the model 14. The model 14 stationary fans appear to all have 4 bolt motors, while the oscillators have 2 bolt motors but an inverted greasecup on the back. The later model 15 has a two bolt motor for the stationary and oscillating fan and a flip up oil cap above the oscillator.  In the stationary model 14 the band around the middle of the motor is stamped steel while the endbells are cast, compared to the later model 15 where the whole motor is cast iron, causing the motor mounting points to differ. The Century Skeletals are one of a handful of early fans to have 5 speeds. This particular fan was one that I bought with a BIN off of ebay.
Posted by Lewis Holland at 7:17 PM 1 comment: 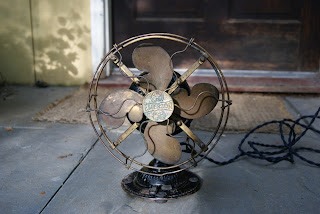 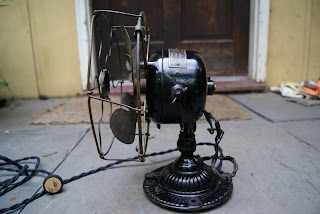 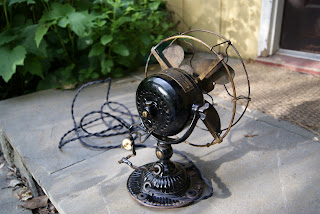 I was very kindly gifted this fan by a friend of my mom. These are pretty uncommon little fans, the 8 inch 'lungers' as they call them with the ribbed base don't show up to much. This one is the earlier version with the Emerson 1500 style badge, the 1500 came before the 11644 in 1909 with a stenciled on off lettering where as the circa 1910 11644 came with a cast on off lettering in the base. This fan was my first brass blade and cage fan and I got it back in June. It has new rubber feet and power cord and I cleaned up the paint with acetone and q-tips. These little guys are one of the smallest centrifigural start switch motor fans around. They have a true split phase motor with a centrifigural start switch that engages and disengages the start windings, causing them to have a distinctive rattle on start up and shut down as the points open and close. I was pretty elated to get it and it's one of my favorite fans. I left the brass in it's tarnished state as I like to keep these fans original.
Posted by Lewis Holland at 6:43 PM 1 comment: 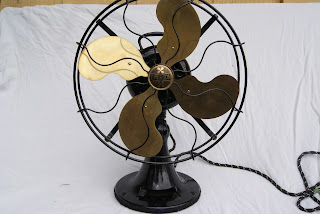 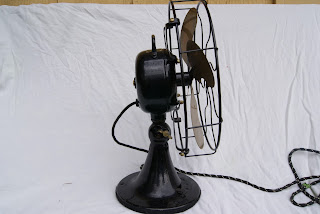 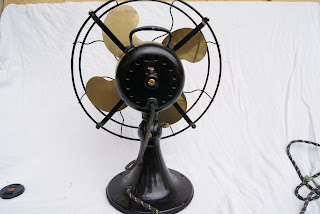 I bought this at the Expo show three or four years ago. These non-oscilators of this time are less common then the oscillators as the oscillating mechanisms had become streamlined by the late teens, this fan dates to around 1919-1920 and is the stationary version of the 27646. I paid $120 for it at the time and had no idea of fan values, but knowing what I do now, that was a fair price.

Note: You can click on the photos to enlarge them. 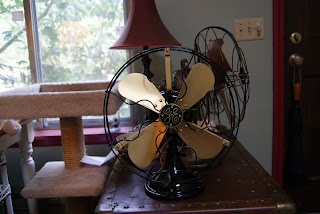 This was a fun project, I picked it up at fanfair and it was coated in black spraypaint and had no wiring. I used Rustoleum black appliance epoxy on it and mattalic gold on the blade and cage struts. This fan is Circa 1918 and has a steel blade due to the brass shortages during WWI, before and after this GE used brass blades, and before brass cages as well.
Posted by Lewis Holland at 10:59 PM 1 comment:

Lewis Holland
I'm a young collector of these wonderful early pieces of machinery. I found my first fan, a little drug store Electrix when I was 8 or 9 years old, and I've picked a few up like it since then. Last year I found the Antique Fan Collector's association and became interested in the early cast Iron and brass fans. Since then I've picked a few up, this blog covers those and more I'll get along the way. I hope it will be informative and interesting.